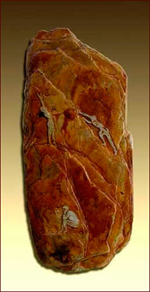 In order to describe my artistic sensibilities, let me tell a story.

Several years ago, I was renting a sculpture studio in Oakland, CA. Downstairs, a large set of wooden double doors opened  to a rather un-kept, overgrown garden area. (I use the word “garden” very loosely). It was the middle of summer, hot and dry. For reasons unknown, I did something quite unexplainable. I walked out into the garden, and began to pull weeds. As a kid, the number one punishment handed down from my dad was to to be sent into the backyard for an afternoon of the dreaded “weed pullin”. I attacked those weeds like a demon, yanking at the dry overgrown grass, and digging at the rocky soil. My knees hurt and the dripping sweat stung my eyes. Why was I doing this?

As if to answer my question, I felt something hard and flat. I pulled what looked like an old coin, quarter sized, but thinner from the dirt. It was crusty and green with oxidation. I felt a rush of excitement. Maybe it’s a really old coin, ancient even; a stretch, I know, but the thrill of the hunt took over. Could our little garden contain archeological treasures? I took the coin inside for a better look, and began cleaning it. There were details, but I couldn’t quite make them out. I pulled out some solvent and a small brush and kept working. My excitement grew. Was that a goats head on one side? Yes, a goat’s head with a fish tale. I turned it over and continued my restoration process. The coin was very dark, like old copper. There appeared to be human figures on the opposite side. It could be Greek or Roman. Wow! I turned on a strong light, pulled out my trusty magnifying glass and went in for a closer look. Hmmm, the figures appeared to be engaged in someway. Definitely Roman! It’s a relic, for sure!

There is just something about old stone ruins, antique ornament and recovered treasures that draw my attention, even if the treasure turns out to be an old adult video arcade token.